Data encryption standard is a symmetric-key block cipher published by National Institute of Standard and Technology(NIST).

Now we are ready to dive into what happens to the data in DES:

The input data is passed through 16 similar rounds where the input is broken into two blocks(32-bits each) and the right block is passed through an encrypting function which gives 32-bit output. This output is then xor’ed with left block and the blocks obtained serve as input to the next round. Each round has a different 48-bit key which is generated from a 64-bit key using key-scheduling function.

The 64-bits input first goes through a standard permutation which is known publicly. It is available on the internet.

After this permutation, the rest of the steps are common to all 16 rounds.

The permuted input is now broken into two blocks of 32-bits each. The right block is always input of the encrypting function while the left block remains unchanged. So we have this 32-bits input and a 48-bits key. The first thing we do is expand the 32-bits input to 48 bits.

The right block of input which was expanded to 48-bits is now xor’ed with the key. XOR means bit by bit addition modulo 2.

This step makes use of S boxes which are non-linear mappings from 6-bits input to a 4-bits output. The xor’ed value (48 bit) from the previous step is divided into 8 blocks of 6-bits. The first block is fed to S1, second to S2 and so on. Each S box now maps the 6-bit entry to a 4-bit output, so the output of all S boxes form a 32-bits output.The inner configurations of S boxes is also available on the internet.

The output of S boxes, forming 32-bits, is again permuted to give 32-bits block according to another standard permutation table. 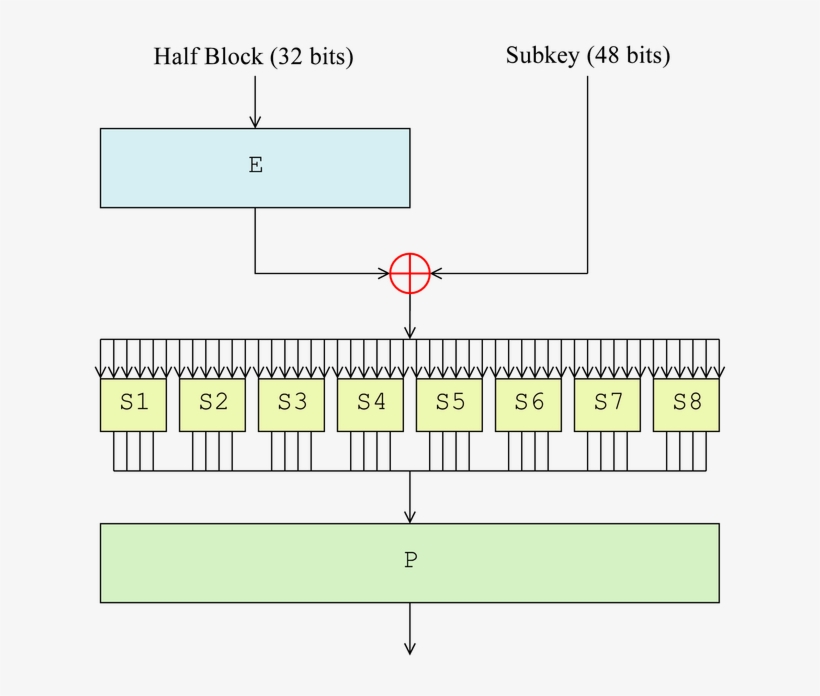 After last round, the bits are permuted for one last time. This permutation is the opposite of initial permutation. It is chosen this way to make DES completely symmetric so that nothing new has to be done to decrypt ciphered data.

Decryption in DES is very easy. Since it is a symmetric cipher, all we need to do is put the encrypted text as input and use keys in opposite order. The output you will get will be the plain text.